One of a series of lasts in Madison: the final meeting of the book club I co-organized with my colleague and friend Yoi Herrera. This time we read A Time of Gifts, the first book in Patrick Leigh Fermor’s superlative (and incompletely finished) account of his youthful journey— by foot, beginning in 1933—from Rotterdam to Constantinople. I love this description of the Hungarian language: “a dactylic canter where the ictus of every initial syllable set off a troop of identical vowels with their accents all swerving one way like wheat-ears in the wind.” Much better than the newspaper article (in the New York Times? I can’t find it) that characterized Hungarian as sounding like something falling down stairs. Fermor does justice to the rich languages of central Europe and the people who speak them. 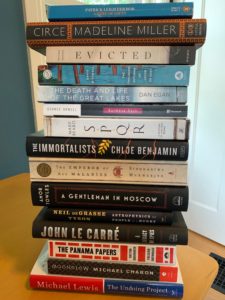 We read a lot of good books, a couple of mediocre ones, and a few classics. Along with A Time of Gifts, I would put The Thousand Autumns of Jacob de Zoet at the top of my list. I also really enjoyed Mary Beard’s SPQR and Michael Chabon’s Moonglow.

In Book Clubs: Women and the Uses of Reading in Everyday Life, the sociologist Elizabeth Long discusses the social role that typically all-female book clubs play in American society. In such clubs, Long observes, the book is important, but so is the broader discussion about members’ lives that it generates. Yoi and I aimed to create somewhat the same environment, though in a co-educational setting and with a conscious decision to alternate fiction and nonfiction. I think we succeeded. It was especially gratifying to discover aspects of my professional colleagues’ personalities and interests that I would not have known from our weekday interactions. (Inevitably, our membership included many political scientists, though not only.) And Masha and I enjoyed the way that our home became part of the social institution—close to campus, we always hosted. I will miss that institution, perhaps more than any other I helped to create in Madison.