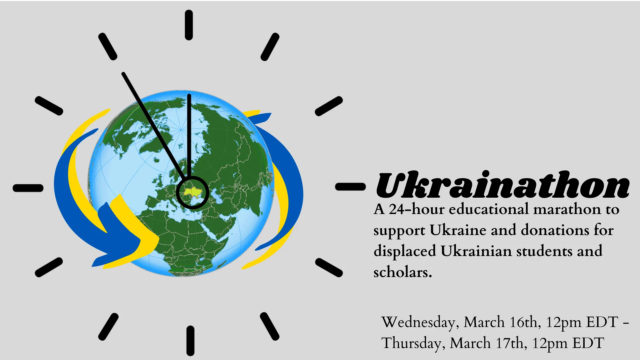 Thanks to the PONARS leadership for this great initiative.

For my fifteen minutes, I would like to talk about domestic politics in Russia, which is obviously central to this conflict.

Let me begin by revisiting some claims I made a week before the invasion, in a piece at the Monkey Cage blog that I wrote with my Chicago colleague Zhaotian Luo. Zhaotian and I wrote then that:

So where are we now, a month later and nearly three weeks after the invasion?

Quite clearly, this is not an easy war. Ukraine is fighting harder, and the West is more united, than Putin apparently anticipated.

In response, we have propaganda in Russia bordering on the absurd. This propaganda has a chance of working only because of draconian censorship. In particular, the Kremlin has banned independent and quasi-independent media, such as TV Rain and the radio station Ekho Moskvy. And it has banned social media such as Facebook, Instagram, and Twitter.

Yet there are a few cracks in this new Great Firewall of Russia:

It’s not clear at this point that Russian censorship and propaganda will be unsuccessful, but the effort seems fragile.

And so, perhaps because of this fragility, we are seeing the beginnings of a much more profound repression than has generally characterized Putin’s rule. Putin’s statements, including especially his remarks earlier today, signal the start of something very dark—a campaign of repression against anyone with Western ties or sympathies.

In summary, I think our view a week before the invasion of what might happen to Russian poltics if Russia invaded has so far, unfortunately, largely been borne out. But what’s next? Looking ahead, I think it will be much harder to understand what is happening, precisely because of the censorship already put in place, and that it will be hard not only for outside observers like us but also for Kremlin officials, including especially Putin himself.

Let me emphasize: this censorship is very crude. Rather than microtargeting particular posts and stories, Russia’s censors are shutting down entire social networks and independent media.

What this means is that, going forward, it will be difficult for Russian authorities to gauge the level of discontent. This is not the Great Firewall of China, which Gary King, Jennifer Pan, and Molly Roberts have shown lets through a certain amount of criticism. Nowhere near that level of state capacity exists in Russia, and with the exception of VKontakte there are no local substitutes, under the control of Russian censors, for the social networks that have been banned. Similarly, the fact that one can now face prison time for calling a spade a spade, for calling a war a war, means that opinion firms cannot even ask a proper survey question, and that survey respondents may fear giving honest responses even to relatively innocuous questions.

The upshot of all of this is that the Kremlin may miss the moment when the public is in need of persuasion. We’re not seeing it at the moment, with the absurd claims of biolabs and denials of any real war in Ukraine, but Kremlin propagandists can be clever. But if the Kremlin never learns that public opinion has turned against it, state television may continue to peddle the same old schlock, long past the point where it is effective. In other words, there is a real risk in imposing censorship too soon, when the public is still inclined to support the war.

And this leads to my final point: The Kremlin’s actions to date may paradoxically lead to an overreaction, to repression even when that is unnecessary. Repression is not costless. Nobody who saw Putin’s speech today can think that foreign investors will return to Russia anytime soon. Moreover, repression may backfire. It angers people and puts them in a position where they have nothing to lose. Yet, critically, repression is not always necessary. It is entirely possible that the Russian population is willing to go along with Putin’s war on Ukraine with minimal encouragement. Putin—and we, as outside observers—may never know.

This is a manifestation of what Ronald Wintrobe famously called the “dictator’s dilemma”—that by stifling speech, the dictator deprives himself of the information he needs to govern and survive.

The irony here is that modern dictators have often sidestepped the dilemma by cleverly manipulating the information available to their citizens, such that they are inclined to do what the dictator wants even when that is not in their individual best interest. Putin seems to have decided to abandon that strategy, to rely instead on maximal censorship and increasing repression. It is not a strategy obviously guaranteed to succeed.