Can historians and economic historians understand each other? That was the subtext of a panel discussion on “Number Trouble” at last weekend’s meeting of the American Association for Slavic and East European Studies (ASEEES). On the panel were some of my favorite historians of Imperial Russia: David Darrow, Tracy Dennison, Steve Hoch, Yanni Kotsonis, and Katia Pravilova. In the audience were Evgeny Finkel, Amanda Gregg, Martin Kragh, Steve Nafziger, and I—economists and political scientists working on late Imperial and early Soviet Russia. And we talked. 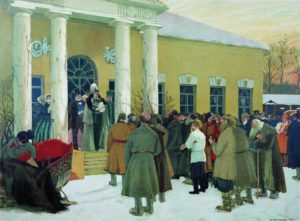 Many historians, I believe, look at social scientists doing history and think: You don’t know where these data came from, you don’t know why they were assembled, and you don’t understand what they meant to the folks at the time they were collected. And yet you insist on sticking these variables into your econometric models and drawing inferences.

Many social scientists, in turn, think: You assume that because the data are noisy we cannot use fancy methods, yet it is precisely because the data are noisy that the methods must be fancy. Done properly, econometrics provides a means of bounding the bias, of asking whether the qualitative conclusions are sensitive to varying assumptions about the data-generating process.

What is to be done when both sides are right? Social scientists will rarely have the nuanced understanding of sources that historians do. At the same time, graduate training and disciplinary incentives imply that historians who truly understand social science will be rare exceptions. Gains from trade will be hard to realize.

One possibility, suggested Steve Hoch, would be for social scientists and historians to coauthor with each other. I like the idea, and I can think of a few good examples, but disciplinary differences imply that such collaboration will be the exception, not the rule.

Maybe we just need to take more opportunities to talk with each other. Martin Kragh suggested after the conference that we should organize panels of historians with social scientists as discussants, and vice versa. My colleague Giuliana Chamedes and I have been trying to do something similar here at UW, with a regular seminar series in History and Politics that draws speakers and audiences from both disciplines. We’re still talking past each other as much as we are talking with each other, but I do think we are at least starting to get used to each other.

2021 “Summer” Workshop in the Economic History and Historical Political Economy of Russia: Call for Papers