I’m teaching Socialism and Transitions to the Market this semester, and we’re reading Francis Spufford’s excellent Red Plenty. Here he is on Khrushchev’s end: 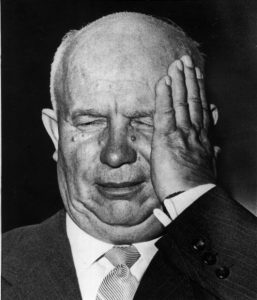 [H]e was starting to frighten them…He had made alarmingly specific, alarmingly verifiable economic promises…He had tried to stick his thumb in the scales of the strategic balance by putting the missiles in Cuba; and the world had nearly burned. He was getting angrier and angrier, more and more impatient, more and more puzzled. “You’d think as first secretary I could change anything in this country,” he told Fidel Castro. “The hell I can! No matter what changes I propose and carry out, everything stays the same. Russia’s like a tub of dough…” The yeasty mass kept pushing back, and all he knew how to do was to keep trying the same methods, more and more frantically, more and more frenziedly, announcing new policies, rejigging the organisation chart, tinkering and revising…Meanwhile, he listened less. He mocked his colleagues to their faces. He sent Mikoyan to Cuba while his wife was dying, then failed to turn up to her funeral. He absent-mindedly alienated supporter after supporter, till by October 1964 there was a solid majority around the Presidium table for replacing him.

Which left the question of what to do about his promises.

Ah, yes. We’re going to have to worry about the promises.