In blurbing my text on Formal Models of Domestic Politics, David Laitin expressed what I then only dimly perceived to be the book’s ambition:

My expectation is that Scott Gehlbach’s Formal Models of Domestic Politics will become the standard text for courses in positive political economy housed in political science departments. My hope, given the clarity of exposition and the engaging examples of the principles in the exercises, is that this text will make such courses more stimulating and spur a new interest in positive theory in our discipline as a complement to the econometric revolution.

A worthy goal, no doubt—but was the ambition too lofty? The text indeed sold well; I had a growing list of instructors who had adopted it for classroom use. Yet all the energy in the discipline seemed directed toward empirical work. Graduate students who ten years before might have been writing down their first models were instead writing preanalysis plans. Among those who did become formal theorists, there were complaints of editors desk-rejecting theory papers that lacked an empirical component (while not rejecting empirical papers unmotivated by formal theory). Formal theorists retired or moved on from top institutions without being replaced. I began to wonder if the more modest ambition for my book should be to preserve a bit of intellectual history.

A chance observation at last month’s MPSA meetings led me to reconsider the state of the field. At the lunchtime editorial-board meeting for the Journal of Theoretical Politics, my friend Maggie Penn reported that attendance at formal-theory sessions was higher than she had seen in years. Could it be that young political scientists were gravitating back to formal theory?

Hearing from me of this promising sign, and confirming that his course enrollments suggested the same, Andrew Little offered (as is his wont) a theory. Now more than a decade into the identification revolution, students have learned to be skeptical of findings from observational data. At the same time, they have discovered that experimental work is difficult and expensive. Each lesson has increased the relative attractiveness of formal theory.

That’s the demand side. On the supply side, recent editorial changes seem to have expanded opportunities to publish formal theory in the discipline’s top journals. (The accompanying figure—thanks, Anton Shirikov—depicts the prevalence of formal-theory papers in the top three disciplinary journals over the past decade.) Most notably, at the JOP, Sean Gailmard as field editor has excelled at shepherding theory papers through the review process, including work by many young scholars. The APSR also seems to have opened its doors a bit—though some of that may have occurred toward the end of the previous editorial regime. (Our count suggests little obvious change at the AJPS.) 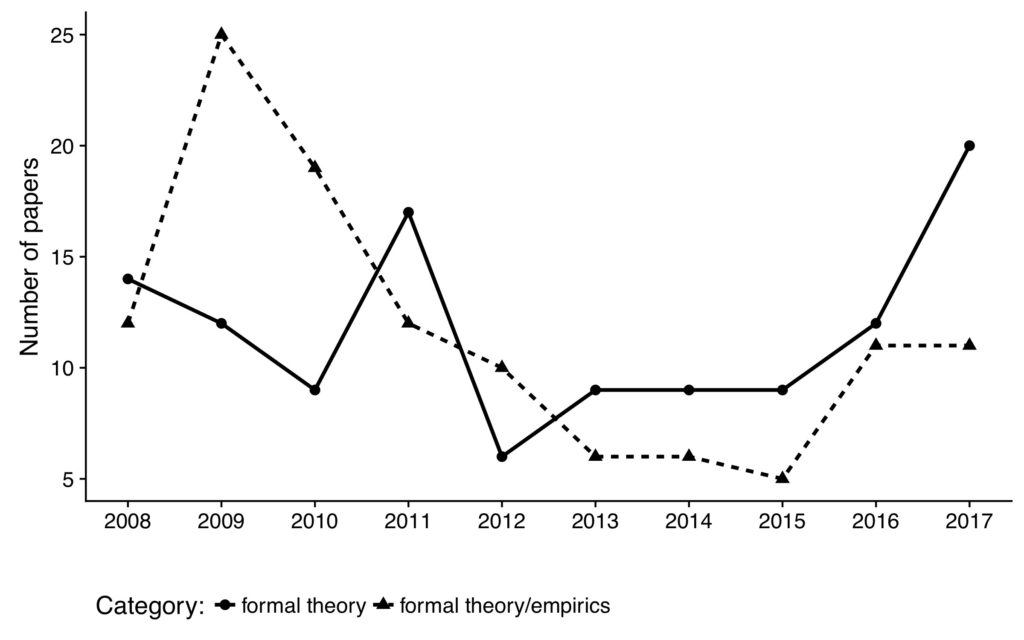 These are encouraging trends as I sit down to work on a second edition of Formal Models of Domestic Politics. (To come: a new chapter on nondemocratic politics, new models for existing chapters, and new exercises.) Time will tell whether they hold.