In one of two or three previous lives, I worked on Capitol Hill in the early 1990s as a legislative assistant to the member of Congress from my home district. It was a heady experience. I had always loved politics, and while my own political views were evolving—ultimately contributing to my decision to move overseas and try something else—I enjoyed seeing politicians at work and up close. For much of that time I lived on upper Connecticut Avenue, and on Sunday afternoons I would bike up to Politics and Prose to see in person the newsmakers who had been on television that morning. 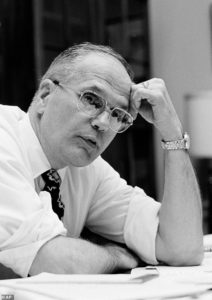 John Dingell was then the chair of the House Energy and Commerce Committee. I remember first hearing him speak during a floor debate over something or other. I was not blown away. Like many newcomers to politics, I confused rhetorical mastery with political effectiveness. I am sure Congressman Dingell gave many fine speeches over the course of his long career (best remembered may be his riff on “‘Twas the Night Before Christmas”), and he emerged in his final years a skilled practitioner of the tweet. Be that as it may, his remarks that day were not designed to persuade. How, I wondered, could such a clumsy speaker have risen to a position of such power?

John Dingell was a master not of rhetoric but of what William Riker famously termed heresthetic: the art of political manipulation, or of “structuring the world so you can win.” I got a glimpse of this during an Agriculture Committee markup of a bill over which Energy and Commerce had partial jurisdiction. Chairman Dingell showed up to ensure that some language was removed from the draft legislation. Seated on the dais in the Agriculture Committee’s main hearing room, he gave the most perfunctory speech in opposition to the language that one could imagine. The only sentence that really mattered came at the end, when he stated (roughly—this was 25 years ago), “And I come here with the proxies of the members of the Energy and Commerce Committee to vote against this onerous provision.”

The proxies…”How many proxies does the chairman bring with him?” asked Kika de la Garza, the genial chairman of the House Agriculture Committee. Dingell slowly looked around the room before answering. “Let’s just say: enough.” The provision was struck without a vote, and the staff in the room declared their collective intention never to play poker with Congressman Dingell.

Riker recognized political manipulation as among the most important of the arts—one that could be learned from instruction as well as from practice. With John Dingell’s passing, we have lost one of our best teachers.