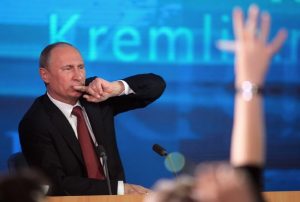 Under Trump and press secretary Sean Spicer, the near-daily White House news briefings have changed from routine interactions with a professional press corps to a high-profile media spectacle. The briefings frequently beat soap operas in daytime TV ratings and have been immortalized on “Saturday Night Live.” While that’s a shift away from normal U.S. politics, it resembles Russian President Vladimir Putin’s media strategy.

How does Putin’s strategy work?

The Kremlin keeps the appearance of a free press while actually reducing transparency. It does this by oversaturating the arena with pro-government reporters, keeping the focus on showmanship instead of content, and limiting opportunities for challenge and dissent. All this makes it harder for the press to hold the government accountable.

I’d give my eye teeth to know if Putin’s press conferences are an explicit model for Trump’s or if this is simply an example of convergent evolution.