Sometime during my first year as a junior faculty member, I was wandering the stacks in Wisconsin’s Memorial Library. I can’t remember what I was looking for, but I remember what I found: a multi-volume chronicle of the peasant movement in Imperial Russia. That serendipitous discovery aroused an interest in economic history and historical political economy that has become one of the pillars of my academic personality. With Evgeny Finkel, Tricia Olsen, Paul Castañeda Dower, Steve Nafziger, and Dmitrii Kofanov, I have examined peasant unrest during the Great Reforms of Alexander II and the Bolshevik Revolution. And now, this week, Evgeny and I have published a short book on Reform and Rebellion in Weak States that returns to the themes of our very first paper with Tricia.1 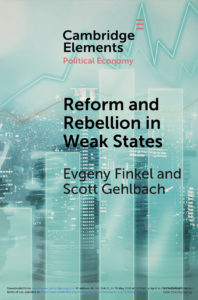 We begin with the question that motivated that paper: When does reform provoke unrest among its intended beneficiaries? It is an old question, one that arguably dates to Alexis de Tocqueville’s observation (in The Ancien Regime and the Revolution) that “The regime that a revolution destroys is almost always better than the one that immediately preceded it, and experience teaches that the most dangerous time for a bad government is usually when it begins to reform.” Our examination of peasant unrest before and after Russia’s emancipation of the serfs in 1861 suggests a possible answer.

To understand our argument, consider a puzzle: How is it possible that the tsar and his ministers—overseers of a weak state that had just suffered a humiliating loss in the Crimean War—were able to effect a radical transformation of state and society that not only granted legal freedom to twenty million serfs but initiated a lengthy process of land reform that extended into the twentieth century? The short story is that, with innovation born of necessity, they relied on the very nobility whose land was to be transferred to the newly freed peasantry. Empowered by the reform statutes with control over the process, numerous landowners jumped at the opportunity to keep the estate’s best land for themselves and to ensure that former serfs received as little valuable land as possible. This opened a gap between what peasants thought they had been promised in the tsar’s Emancipation Manifesto (read out in village churches across European Russia) and what they actually received. That grievance translated into the largest wave of peasant unrest in the nineteenth century.

Our intuition, then, is that the delegation of reform’s implementation to those with a stake in the status quo plants the seeds of rebellion. But this raises further questions: To what extent do those with the power to block implementation internalize the resulting unrest? And is there always a trade-off between stability and reform, or is it possible to pursue the latter without risking the former? These are the sort of questions best answered with a model. In the book, we provide a simple one that builds on recent work in economics on contracts as reference points. In our context, the promise of reform represents an implicit contract against which its subsequent implementation is measured. From the tsar’s perspective, this promise is a double-edged sword. On the one hand, by allowing for disappointment, reform raises the possibility of unrest. On the other, the possibility of unrest encourages those with control over implementation—local agents, in our telling—to abide by the spirit of reform. A very general result is that any reform that incentivizes local implementation necessarily also increases the risk of rebellion.

This theoretical framework provides a lens through which to reexamine the Russian case. Relative to our earlier work, the analysis in the book pays more attention to the dynamics of unrest over the two-year period that follows publication of the Emancipation Manifesto in early 1861. A key finding is that it took time and the arrival of “peace arbitrators” (Leo Tolstoy was one) for peasants’ understanding of the intent of reform to settle. Once it did, and the actual process of negotiating terms began in earnest, landowner opportunism and peasant unrest were joined at the hip.

But wait: there’s more. In addition to a detailed analysis of the Russian case, for which we have rich data and a setting that allows for causal identification (emancipation directly affected only one of two large classes of peasants distributed unevenly across European Russia), we provide an extended discussion of four additional cases, each of which supplies some form of empirical leverage. The Tanzimat Reforms of the Ottoman Empire are a “most likely” case for our argument, given similarities in the nature of reform and the broader political context with the Russian case that motivates our theory. In contrast, the Lex Sempronia of Tiberius Gracchus—perhaps the world’s first major land reform—exhibits important internal variation in reform design, with top-down implementation among Roman citizens but not Rome’s Italian allies. (A big shoutout to my podcaster friend Mike Duncan of History of Rome and Revolutions fame for suggesting that we look at Ancient Rome.) Our extended riff on Tocqueville demands that we reexamine the French Revolution, where a detailed historical record allows us to trace the process by which the National Assembly’s declaration of the end of feudalism ultimately led to increased unrest. Finally, we briefly analyze several instances of land reform in twentieth-century Latin America, exploiting important variation not only across but within states.

It’s a fun read, and a short one. And it’s available for free download through June 17. Check it out.