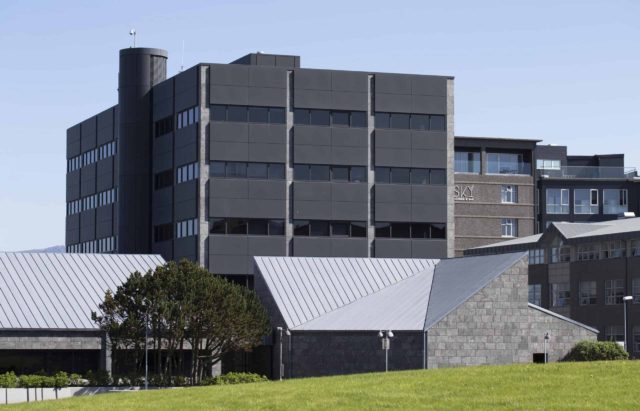 Cross-posted from Broadstreet, a blog devoted to historical political economy.

As Pavi discusses, one component of state capacity is “bureaucratic capacity,” which following Michael Mann she conceptualizes as “the ability of the state to penetrate society and implement policies.” Various authors cited in Pavi’s post have measured such capacity as the number of bureaucrats per capita in some administrative unit: municipality, region, and so forth. With an important adjustment I discuss below, I did much the same in my work with David Brown and John Earle on bureaucratic capacity and privatization performance in postcommunist Russia.

In my view, relating bureaucratic capacity to the size of the bureaucracy makes obvious sense: increasing the quantity of labor pushes out the production-possibility frontier in any process that requires human effort. If you are skeptical, you might ask yourself whether the time you spend mailing a package at the post office depends on the number of people behind the counter. (In principle, too many postal workers could create congestion, but this is not an issue in any post office I have frequented.)

In thinking about the size of the bureaucracy, however, it is important to recognize that, as in many areas of human activity, there are economies of scale in public administration. How many central bankers does Iceland need? One. How many does China need? One. That works out to approximately 4,000 times more central bankers per capita in Iceland than in China. Include the entire staff of the central bank, and the ratio will shrink somewhat, but not enough to eliminate the impression that Iceland is to China as modern France is to Neolithic Europe.

In other words, in “normalizing” the size of the bureaucracy, we need to do more than simply divide through by population. We should ask: how large is the bureaucracy, relative to the size of the administrative unit being governed, taking into account economies of scale in public administration? There is a straightforward way to do this, as David, John, and I discovered in the work cited above, and as I discuss further in a review piece published around the same time.

Here is one way of looking at this. For Russia’s regions, plot log bureaucrats per capita against log population. 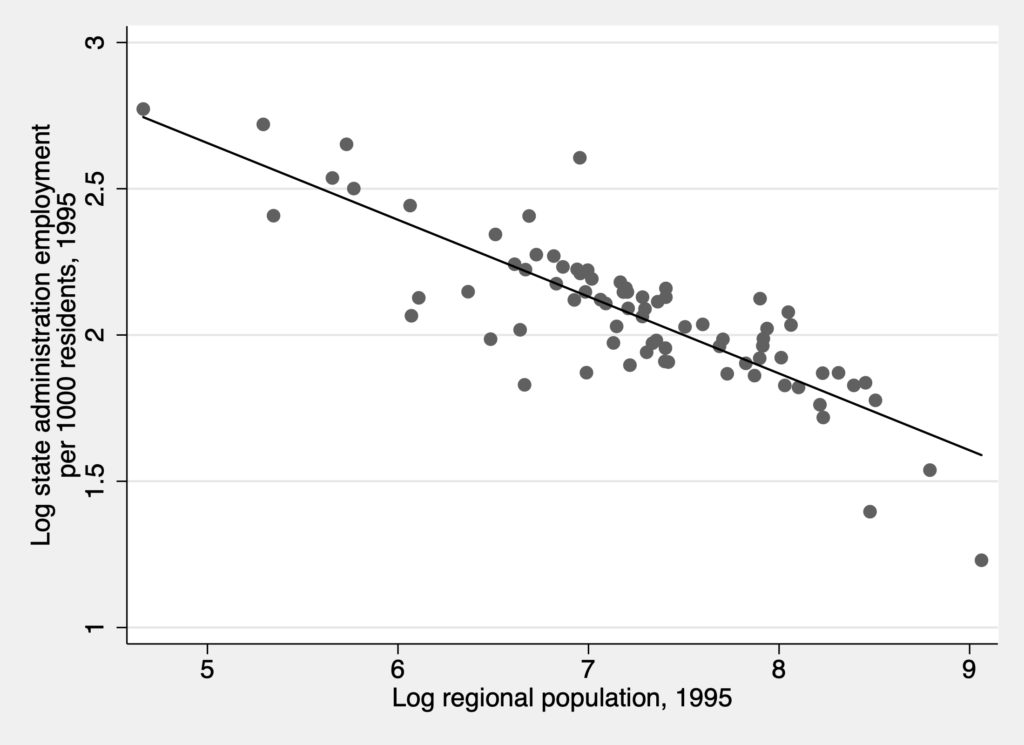 Is this just about Russia? I don’t think so. Here is the relationship between bureaucracy size and population for the nine postcommunist countries examined in the review piece I cite above. 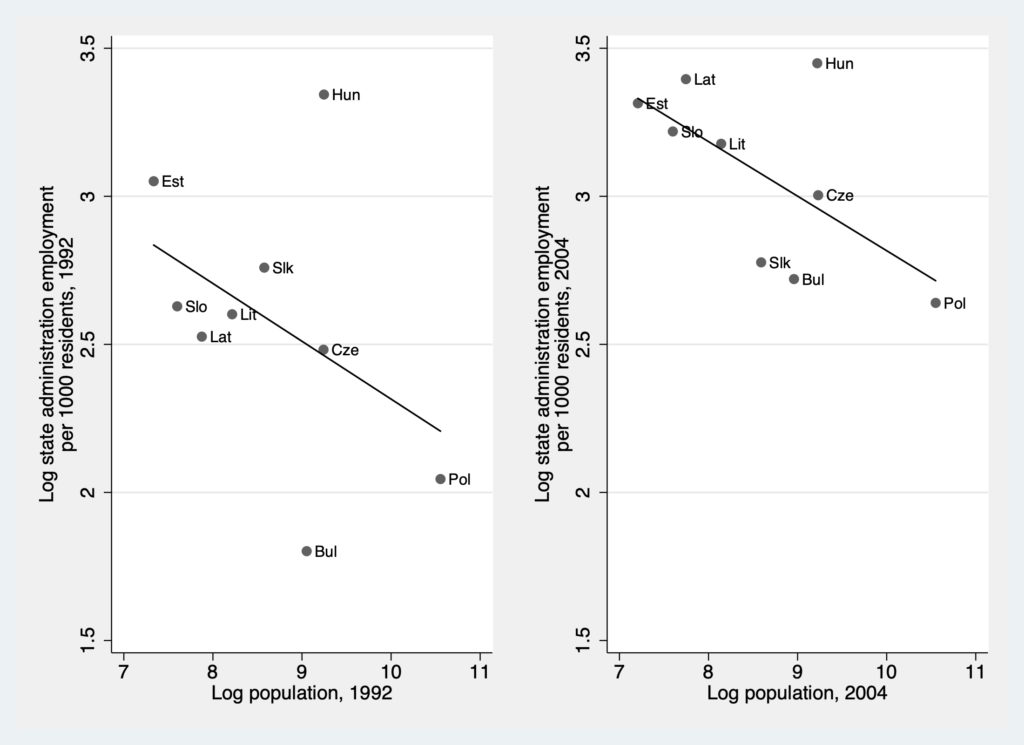 There is a secular increase in bureaucracy size between 1992 and 2004, reflecting among other things the creation of a state apparatus to replace the old Party bureaucracy, but the general relationship is remarkably unchanged across a decade of profound transformation. Unless I have missed something recently, there don’t appear to be comparable data on public-administration employment for the world at large that are reported on a regular basis, but there is a World Bank study from the late 1990s that provides “detailed statistical and econometric evidence on government employment and pay.” With the help of Dmitrii Kofanov, I looked at this a few years ago. In a regression of log central bureaucracy on log population in a sample of 124 countries, X equals approximately 4/5. The fit is tight, with an R-squared of over 0.70. Include “continent” dummies and X drops to around 3/4, much as we observe across regions in Russia. Hardly the last word—somebody really should look at this systematically—but I think sufficient evidence that one should routinely check for such relationships when measuring state capacity using bureaucracy size.

A final point: Many but not all bureaucrats interact with people. Some interact instead with animals, plants, or minerals. When that is the case, economies of scale will be not in human population but in whatever else is being governed. We see this, again in Russia (h/t to Delgerjargal Uvsh and the rest of the team working in Volker Radeloff’s lab at Wisconsin), if we look at the relationship between size of the regional forest bureaucracy and the forest area under management. 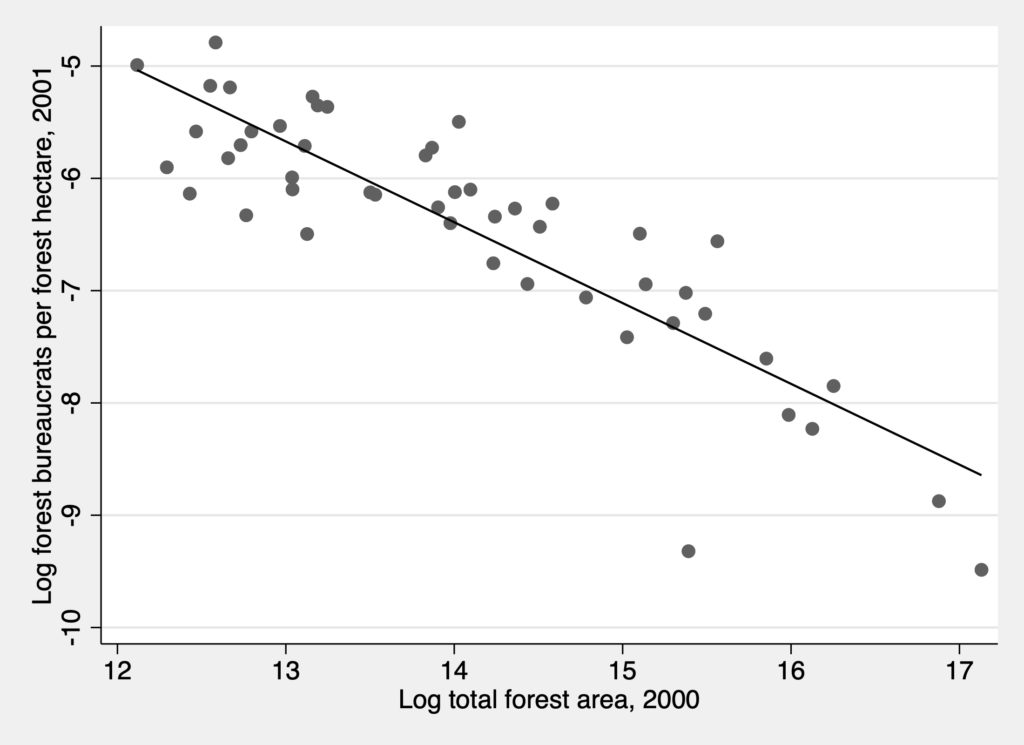